Former ‘insomniac’ and I Quit Sugar founder Sarah Wilson has revealed how she revolutionised her sleep – and the three products that mean she can now get between seven and eight hours of shut-eye per night.

The globally-acclaimed author from Sydney, 45, said she has been an insomniac since she was seven years old, but several things have helped her immeasurably.

‘I tried each of these for three months each, independent of the other two and other aids, so I could determine if they worked,’ Sarah wrote on her website.

So what does she swear by?

Sarah tried a Neptune blanket, which costs $192 and is TGA-approved as a medical device and said the effects were ‘immediate’

You might have heard people who struggle with sleep speak about weighted blankets, which are constructed with dozens of pockets filled with glass beads that amount to ‘about 10 per cent of your body weight’.

The idea is that the heaviness helps to ‘relax’ your central nervous system, and Sarah said a weighted blanket is somewhat like being held or hugged.

Sarah tried a Neptune blanket, which costs $192 and is TGA-approved as a medical device.

‘I get restless legs and the blanket dampens this completely.

‘It provides a feeling reminiscent of being “tucked in by your grandmother when you’re a kid” that sees me calm down a lot as I try to settle in to sleep.’

The Scenar is a ‘hand-held device, the size of an old-school mobile, that you apply to your body to reduce pain and inflammation’

The second item Sarah loves for sleep is something you may not have heard of: the Scenar.

The Scenar is a ‘hand-held device, the size of an old-school mobile, that you apply to your body to reduce pain and inflammation’.

It works by sending an electric current through your body that helps to stimulate your body’s own healing capabilities.

Sarah said she finds it especially beneficial for inflammation and digestion issues – both of which often keep her awake.

She also uses it to calm herself down by applying it to her calves – which she said helps to settle her body’s nervous system.

There has been a lot of information circulating around CBD oil, with many claiming it has helped to manage anxiety, pain and insomnia.

And Sarah said she believes the hype.

Sarah said she now loves taking a squeeze or two of the oil with water daily for stress management. One of our SCENAR Practitioners – Mohamed Khatib reported some wonderful feedback from his clients using SCENAR®-Vertebra.

Not only they receive a non-invasive pain relief treatment, but they feel like they are in a 5-star hotel. With all the little details that make their experience really comfortable and relaxing.

Mohamed’s treatment room is equipped with an electrical massage bed, a special silicon pillow that supports the client’s head when using the SCENAR®-Vertebra, an overhead TV entertains the client during the treatment and educates them about natural therapies and healthy life style.

Mohamed is also a Su Jok Practitioner and Prana Healer. His contact details are:

RITM OKB ZAO – honored member of the Russian Chamber of Commerce and Industry!

RITM OKB ZAO was given a title of the Honored Member of the Chamber of Commerce and Industry of the Russian Federation. The respective resolution was signed by the Chairman of the Management Board of the Chamber S.N. Katyrin.

As stated in the resolution, our company is honored for the “significant impact in the economic development of the Rostov region”.
This is already second title of honor we received this year. This spring, during the Fifth Economic Forum that took place in Yalta, RITM OKB ZAO received a prestigious regional award and became the Exporter of the Year in the nomination of Export in the high tech sphere for small and medium businesses. The winner of Golden Dragon 2019 gets professional SCENAR Device

The winner received a professional SCENAR device, which has proven its efficiency for pain relief using conductive gloves.

The prize was presented to the winner by RITM OKB ZAO’s executive director Igor Rakevich.

Before the contest all participants attended a presentation about SCENAR devices, where Boris Kulizhskiy, physiologist and specialist in bio-controlled therapy, spoke of the history of creation and advantages of SCENAR technology, as well as SCENAR therapy techniques. 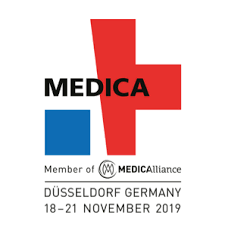 RITM demonstrated the new model line of SCENAR devices and ULM healing blanket and clothes, consulted the visitors regarding the use of innovative operating modes and performed SCENAR treatments.

Among many other attendees, our stand was visited by the representatives of medical centers and clinics and medical device distributors from around the world.
The Trade Representative of the Russian Federation in Germany Andrei Sobolev was interested to learn about our products. MEDICA is the leading international medical expo with over 40 years of history. This year it took place from November 18 to 21 and hosted more than 5000 exhibitors from more than 60 countries, including manufacturers, sellers, and representatives of clinics, hospitals, and research organizations.
The Russian Trade Representative in Germany Andrei Sobolev (second from the right) SCENAR was successfully presented at the International Expo in Vietnam

Before this event no one has heard of SCENAR in Vietnam. The device which is able to replace the physio therapeutic treatment and home first aid kit, and compete with drug painkillers attracted boatloads of attention. SCENAR team was busy all days long, barely having time to take pictures of the groups of interested visitors.Our colleagues shared a lot of information about the SCENAR technology, the attendees listened carefully, asked numerous questions and some of them even tried to use the device on their own.

Our stand was visited by the Russian Ambassador to Vietnam Konstantin Vnukov and the First Deputy Minister of Trade and Industry of the Russian Federation Sergey Tsyb.
The officials of Vietnam and Russia promised their support and cooperation in registration process and search for business partners.

Our Deputy Director for Foreign Affairs Marina Gdalevich had a speech during the round table that was dedicated to the Russian-Vietnamese cooperation in medical sphere. We have signed the agreement of intent with one of the Vietnamese companies.

It can be stated that we have strong perspectives for future cooperation in Vietnam and we hope to see certain results soon. Many clients have been misled to think that Physiokey and Sanakey are the latest SCENAR devices, made in Germany. The truth is that the former RITM OKB’s distributor in Germany tried to reproduce a year 2000 model RITM SCENAR and released it on the market in 2015, using the established brand name SCENAR. The so called Key series devices are not researched clinically and their CE Mark is based on the conventional TENS and SCENAR trials.

Since then RITM OKB have published numerous materials (links to these publications are below) advising that they are not associated with these products as well as proving that Physiokey and Sanakey technically do not incorporate SCENAR technology.

The latest publication by RITM OKB ZAO explains very well the major difference between the genuine SCENAR and all its analogues – the Transformer. This is the key component that produces the SCENAR signal and which makes the SCENAR therapy so effective and so unique. The transformers built into the RITM SCENAR devices are manually adjusted and fine-tuned to the right sensitivity of the human skin and this procedure is the most expensive element of all RITM SCENAR devices.

All other devices that claim to be SCENAR use cheap mass-production transformers that cannot be adjusted at all. Such an approach simplifies and reduces the products costs, but as result of using this part, the SCENAR signal is deformed and therefore the device is providing little or no therapeutic effect. The image below shows a Physiokey motherboard with a regular, non-adjustable transformer – the part located just above the LCD.

Apart from the transformer, there are numerous other technical problems (which are not as critical as the transformer but very important for the safety and efficacy of the therapy) found in the copy-cat devices such as the lithium battery, energy strength, LCD, electrode port, case material, etc.

It is important to note that RITM OKB ZAO has 5 full time employed engineers in their Research &  Development Department for new devices, who conduct function  and firmware research and development. 20 full time employees are responsible for the technical and documentary support, and quality control. Over 100 medical doctors in Russia and overseas are involved  in development of new treatment protocols, conduct clinical trials and training. RITM OKB ZAO undergoes two audits per year to maintain the ISO, CE, FDA, TGA Certifications. These are all huge ongoing investments for the development of SCENAR technology that none of the copy-cat device manufacturers invest in their products.

The history of SCENAR product development  is shown in the chart below to provide more information about the Genuine RITM SCENAR devices and copies. Overall, there were more than 200 companies represented, including, the medical research laboratories from the majority of European countries.
This is already the third Medical Week in which RITM OKB ZAO is taking participation along with other well-known companies. Our products attracted interest of not only guests, but also business partners.
It is obvious that the awareness of German society of SCENAR grows every year. There are more and more SCENAR users and thankful customers visiting our booth every year eager to learn about new device features and developments in SCENAR therapy.
In Baden-Baden we received a lot of positive, sometimes even fantastic feedback on SCENAR devices. Many people also highly rated the ULM products, saying that they do a great job in relaxation.
Besides the exhibition itself, there were more than 300 seminars and lectures that took place in Medical Week. The course is for first time owners of a Personal SCENAR device and provides a relaxed informal hands-on introductory training session to help you become more confident using your SCENAR device.

The 4-hour Personal Device Training and Familiarisation Workshop will provide you with new skills and a deeper understanding of SCENAR Technology .

About the trainer: Manuela King is a level 3 accredited trainer with RITM Australia and the trainer for WA. Places are limited. Location TBA/ Mundaring Hills area 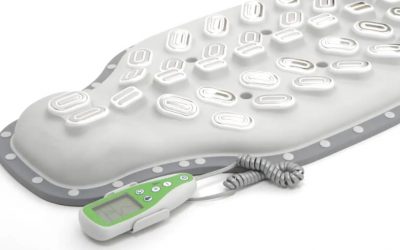 SCENAR®-Vertebra is in stock in Australia

We are pleased to advise that we received the first delivery of SCENAR®-Vertebra. It is an amazing product suitable for Home Users as well as Professionals.

To learn more about its features please click HERE

The winner of Golden Dragon 2019 gets professional SCENAR Device