A Holistic Approach and Scenar to Treat Lameness in a Horse

A Holistic Approach and Scenar to Treat Lameness in a Horse 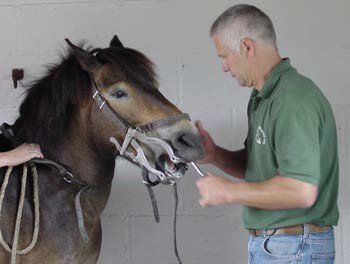 Abstract
The following case study demonstrates how a lateral-thinking approach to equine lameness can often result in a successful conservative approach to treatment avoiding radical surgery. In this Case, corrective dentistry and farriery combined with Scenar treatment resulted in a full return to athletic work without the need for a neurectomy. Bob rasping pony teeth

Full Case Study
F was a 7 year old gelding horse that had gone lame on the left hind leg. The conventional approach of box rest for a couple of weeks, alongside a course of non-steroidal anti-inflammatory (Phenylbutazone) had provided only temporary relief. F was referred to the renowned Animal Health Trust for a full lameness work up. He was observed when trotted up and under saddle, and subsequently had a series of local anaesthetic nerve blocks on the left hind leg to sequentially numb the leg from the foot up towards the hip in order to establish where the lameness was centred. It was commented in the subsequent report that F was not keen on taking a mouth contact with the bit, but no relevance was attributed to this.

Inflammation of the high suspensory ligament of the left hind leg was identified and confirmed on ultra-sound. A peri-neural local anaesthetic to the nerve supplying the ligament resulted in F coming sound. F was recommended to have a neurectomy of the deep branch of the plantar nerve and plantar fasciotomy, which means that the nerve
to the suspensory ligament would be cut and the soft tissue around the ligament trimmed to enable the ligament to move more freely. This procedure was given a 70% chance of success based on previous success rates of past horses having this procedure returning to athletic work. This procedure is banned under British Show Jumping Association rules and also at FEI level competition.

F’s owner decided that this was a rather drastic treatment of what had only been a relatively mild hind limb lameness. After searching on the internet, F’s owner approached Natural Healing Solutions to see if there was an alternative treatment option.

A more holistic approach to F’s lameness discovered that F had some dental issues that were creating discomfort with the bit in F’s mouth, causing him to constantly bend his head to the left and put more pressure through the left hind/right fore diagonal. It was also causing F to carry his weight further back than normal, and put more pressure than usual on the back legs. These two factors together meant that the left hind leg was taking more than its fair share of F’s weight. Not surprisingly, this extra strain was increasing wear and tear on the soft tissue structures of the leg, and the high suspensory ligament in particular. It was also discovered that the medio-lateral foot balance was not as good as it should have been, which altered the forces generated by moving from going straight up the leg and was putting more stress on the soft tissue structures.

Checking F with Scenar confirmed there was a problem with high suspensory ligament of the left hind leg and also to a lesser degree with the left stifle (knee joint). Scenar also revealed that there was an issue with the front right superficial digital flexor tendon which would also encourage F to take most of his weight on his back legs. Scenar uses the body’s own nervous system as a means of detecting pathology and activating natural healing processes. Scenar monitors body electrical resistance and tissue frequency in an ongoing manner to efficiently correct any pathology in line with the body’s response to treatment. Scenar signals are altered according to individual responses such that each patient receives an individually tailored treatment. It is these properties that make Scenar an extremely effective tool for locating problem areas and initiating self healing whilst providing pain relief. C-fibres of the nervous system have the highest threshold of excitement and correspond to approximately 85% of all nerves within the body. They are involved in the production and distribution of neuropeptides (NPs) and other known regulatory peptides (RPs). The Scenar, with its high current amplitude impulse, activates more C-fibres than other electrotherapy modalities. Stimulation of C-fibres causes a release of RPs, including NPs and endorphins. It is therefore not uncommon for horses being treated to become very calm and relaxed as if sedated, and is a good indicator that treatment is correctly located on the body and will be effective. Neuropeptides (NPs) have been found to be the fourth most numerous group of neuromediators. Their action in both the peripheral and central nervous systems has become ever increasingly recognized. They are responsible as a group for a wide range of regulatory processes. In-depth studies of NPs has always found an action on the genome activity. Healing is therefore being triggered at a very fundamental level. NPs are also peculiar in that they persist significantly
longer (from tens of minutes for short-chain peptides to tens of hours for long-chain peptides) than other neurotransmitters such as acetyl-choline (10-2 seconds). This, combined with the fact that NPs degenerate down a cascade of biologically active compounds, explains the observations with Scenar where effects are long-lasting and can improve not only the imbalance being addressed, but also distant problems.

Holistic treatment began by doing corrective dental and farriery work so that when the high suspensory ligament recovered, F would be happy to carry himself straight and in a more balanced way with regard to his front/back weight distribution than before. This reduces the risk of recurrence of this condition. Scenar treatment was applied to all the areas that it had identified as having problems, but primarily the high suspensory ligament area. Treatment was carried out every 2 weeks for 2 months alongside gentle exercise throughout. F made a full recovery. He has returned to a higher level of athletic performance than he was previously achieving even when he was considered to be sound. This case is typical of many successful results achieved for this and other similar conditions by the author and his para-professional team. Unfortunately many more horses have been operated on, largely unnecessarily in the author’s opinion. The author also questions the reliance that can be placed on local anaesthetic nerve blocks high up a horse’s leg. With only a 70% success rate for horses with a sectioned nerve that went sound on local anaesthetic nerve block during the diagnostic procedure, it begs the question do horses go sound by moving from memory once they lose proprioception above a certain level on a limb?

This case history not only highlights the usefulness and effectiveness of Scenar for treating horses, but also that its role is most effective when combined with a more lateral-thinking approach to health with the understanding that all parts of the body are affected by dis-ease, and that all areas must be assessed in order to get a full understanding of the pathological process. Removing obstacles to cure (by correcting dentistry and farriery in this case) is as important for any adverse health condition as finding the correct treatment procedure if a lasting cure is to be achieved. It also highlights the ethics of doing procedures such as sectioning a nerve just because modern medicine has identified that it can be done. Such quick fixes rarely turn out to be so in the long run, and frequently create their own issues.